Franchise Partner of the Year 2013 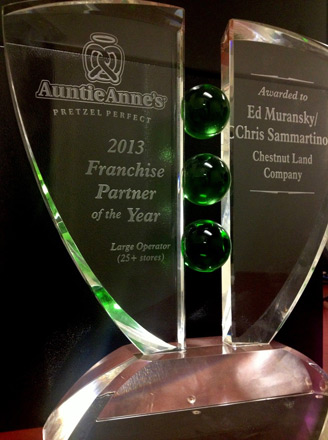 In January at the FOCUS Brands 2014 Worldwide Franchise Partner Convention, our top franchise partners and stores in the Auntie Anne’s system were recognized. Congratulations to all of the award winners!

Franchise Partner of the Year
Criteria: Recipients of this exclusive award have previously been honored with the Pretzel Perfect Store Award and have contributed significantly to the Auntie Anne’s system and overall industry.

As they have grown, they have been committed to the following business values: treat every person with respect and dignity; and be true to yourself and your vision. These values have guided their investment in employees, making a difference in their local communities, approach to service and sampling, and overall operations.